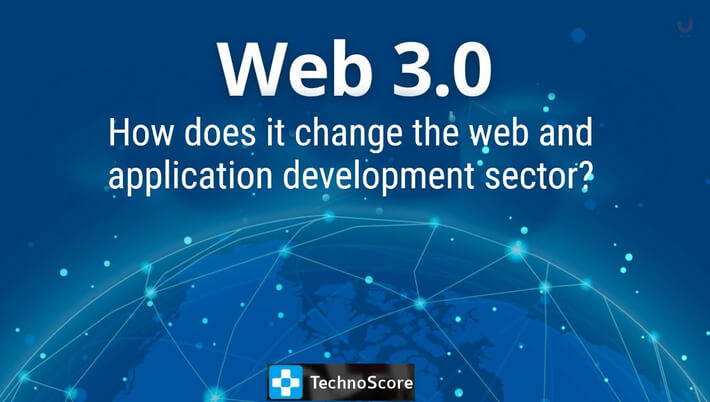 The rise of blockchain-based technologies such as cryptocurrencies, NFTs, Metaverse, Blockchain, and distributed ledger technology, among others, is being heralded as the beginning of a new era of the internet – a more accountable and transparent version of the internet that users can collaboratively control. Several experts believe that the modular Web, also known as Web 3.0, would improve the digital world’s accessibility and inclusiveness.

Web 3.0, a continuation of Web 2.0, is expected to become the future internet paradigm. There is still a lot of discussion over whether or not Web 3.0 exists. Many think we have already reached this period, while others believe that we still have a long way to go before we arrive.

Web 3.0 is getting ready to transform how businesses function and how internet users engage with the digital world, thanks to the most revolutionary innovation of our time. In this article, we’ll take a closer look at Web 3.0 and how it will change the web application development sector.

So, let’s start! Before heading towards the overview of Web 3.0. let’s talk about,

The history of the web from idea to 3.0

Web 1.0 was introduced in the 1990s, and it presented content to users but did not allow them to interact with the websites. The online pages appeared to be more like digital papers on the screen in this manner. HTML was the most popular programming language at the time.

Around 1999, Web 2.0 arose as a result of the rise of social media platforms, digital marketing, blogging, and other services that allowed users to engage with the internet. Web 2.0 refers to a shift in how people use the internet rather than any specific technical enhancements.

The internet has evolved from a read-only platform to a platform for content development and interactive experiences. Individuals could contribute articles and comments on Web 2.0 sites, and users may make accounts on many sites, which encouraged involvement and increased the number of individuals who used the internet on a regular basis.

Web 2.0 was designed to encourage more users to generate original content. The emergence of applications, self-publishing platforms like WordPress and Squarespace, and social networking such as Facebook, Instagram, LinkedIn, and YouTube marked Web 2.0. These websites have a strong emphasis on user-generated content, engagement, and user-friendly layouts, all of which are hallmarks of Web 2.0. Web 2.0, to put it simply, is the concept of “the internet as a platform.”

And as soon as huge corporations understood that the incomprehensible amount of personal data suddenly at their fingertips was the most valuable asset, data stockpiling began at Amazon, Facebook, and Google’s centralized systems. Users began surrendering their security in exchange for the expediency of better services, and before they realized it, their surfing histories, identities, and online buying were being sold to the highest bidder with shady objectives.

It’s an open and equitable network where people can engage without worrying about their security or privacy being compromised. By combining the power of AI and Big Data, the web version will make the service intelligent while also making the web semantic. Web 3.0 will thrive in a new era in which the internet will be powered by Blockchain in order to become more natural. Decentralized protocols will enable Web 3.0, thus I believe the internet, blockchain technology, and cryptocurrencies will be integrated and automated in the future thanks to smart contracts.

Web 3.0 will be an improved and updated version of the internet as we know it now, with added benefits due to autonomy. Artificial intelligence (AI), the semantic web, and omnipresent characteristics may all be incorporated into Web 3.0. The purpose of implementing AI is to provide end-users with faster, more available details. A website that employs AI should be able to sort through and present the information that it believes a certain user will find useful. A dVPN service, like other modular apps and platforms that make up Web 3.0, is powered through other web users like you. In this P2P network, each member earns cryptocurrency by renting out their IP address and bandwidth to others. None of your data can be stored securely anywhere thanks to the dispersed infrastructure, and all communication passing through these personal nodes is heavily secured.

This Web 3.0 tool allows you to circumvent unethical censorship and spying. Every day, governments around the world try to ban the use of encryption techniques and anonymity in any form. It’s time to fight back, with more than a quarter (27%) of the world’s internet users living in countries where they can be jailed for posting, sharing, or even “liking” something on Facebook. Web 3.0 can safeguard its users by keeping them private while they surf the web in an open and secure manner.

The impact of web 3.0 on companies will be to make them more transparent and user-centric. Everything that was wrong with how corporations handle user data will undergo a radical transformation.

For example, if you want to check the availability of goods in your home while you’re at work, you may ask your digital assistant to carefully inspect your refrigerator by interacting with your house’s interconnected smart gadgets. You may also utilize your omnipresent Internet-connected devices at home to coordinate your holiday plans, business trips, weekend parties, housekeeping tasks, and even secure your home security. The virtual assistant’s unique recommendations assist you in planning the perfect weekend, from getting discounted tickets to discovering intriguing new places to visit by booking hotel reservations.

Here are some of the instances of web 3.0:

Steemit – Steemit is an excellent example of a web 3.0 social network. It’s a distributed reward system based entirely on the Steem Blockchain social media platform. It compensates content authors or bloggers with cryptocurrencies in exchange for their contributions to the site. This is where web3 comes in handy since it allows the platform to reward contributors’ bitcoins securely.

Everledger – Everledger is a web 3.0 example combining insurance and finance. This distributed digital global registry is intended to allow users to store their digital information and access it whenever and wherever they choose while maintaining data security. Everledger can protect data and reduce the risk of fraud for consumers, banks, open marketplaces, and insurers because web 3.0 contains a data encryption function.

Siri – Voice recognition software, such as Siri, is a fundamental web 3.0. Siri and other personal assistants employ this technology to interact, share information (through linked blocks), and present consumers with more useful search results for any meaningful inquiry, such as how to, why, and what. Originally, Siri could only perform simple tasks using pre-programmed algorithms, such as reminders and directions to the nearest grocery shop.

Decentralization, artificial intelligence, edge computing, and other emerging trends are all incorporated into Web 3.0. These factors, taken together, could have a significantly bigger impact on the coming decade than Web 2.0 has had thus far.

Let’s have a look at each of these major developments.

Edge computing – As consumer gadgets such as phones, computers, appliances, sensors, and cars gain increasing processing capacity, the servers at the network’s core are supplemented at the margins, frequently right in the user’s hands. Computing jobs that were previously limited to expensive data centers can now be carried out closer to, if not immediately at, the location where the information is collected.

This enables new use cases that require vast amounts of data to be evaluated in real-time but are otherwise unreachable due to bandwidth constraints or transmission delays. A video feed from a camera or smartphone, for instance, would have to travel to a remote cloud data center, where sophisticated servers would execute facial recognition techniques before returning the results.

For bigger use cases with hundreds of camera feeds or real-time information requirements, this approach would consume traffic and time to process, posing scalability issues. Local edge servers, cameras, or even smartphones themselves might run image recognition algorithms in an edge-computing architecture. Web 3.0 thrives the way for new use cases, including virtual and augmented reality, self-driving cars, and smart cities.

Blockchain Technology – In layman’s terms, Blockchain is a new layer of technology that sits on top of web 3.0. Blockchain, in particular, is the backbone of web3, as it transcends the database systems in the semantic web’s backend.

Low Code Apps – Following the lockdowns, businesses have realized the importance of having a strong online presence. Because they’re the closest thing to an in-store experience, mobile applications are one of the most valuable virtual resources an organization can have.

Small businesses have been unable to establish mobile apps because of these large barriers to entry. With the release of Web 3.0, however, a swarm of low-code or no-code app-building platforms cropped up. With little to no coding knowledge, these platforms make it exceedingly simple to create an app.

Decentralized network – Decentralized data networks allow different data generators to sell or exchange their data without surrendering ownership, jeopardizing privacy, or relying on middlemen. As a result, in the emerging ‘data economy,’ decentralized distributed networks will have a vast list of data suppliers.

For instance, when you use your email and password to enter into an application, or when you like a video or ask Alexa a question, all of these actions are logged and analyzed by internet giants like Google and Facebook in order to better target their adverts.

BaaS – It’s a new blockchain trend that numerous corporations and businesses have already embraced. BaaS is a cloud-based service that allows clients to collaborate on digital products using Blockchain. Smart contracts, decentralized applications (Dapps), and other applications that don’t require the entire blockchain infrastructure to work are examples of digital products. Microsoft and Amazon are two giants that are developing blockchains and providing a BaaS service, which will have an impact on the future of blockchain applications. Moving forward, let’s talk about,

Following are the key benefits of web 3.0-

How is web 3.0 transforming the web application development sector?

Here are some possible ways of web 3.0 transforming the web application development industry:

We’re on our way to an Internet where people have complete control over their data and privacy while also allowing companies to exploit it (or not). All of this will be made possible by blockchain technology.

As a result, from tailored search results to cross-platform development tools and the use of 3D graphics, web 3.0 will speed the honest and transparent use of user data. The internet will become more comprehensive and interactive in the near future. Soon, the new Internet will be available! The web application development has seen a massive change with the immersive technologies so let’s jump into the new phase of web 3.0 and get started to take business to the next level.