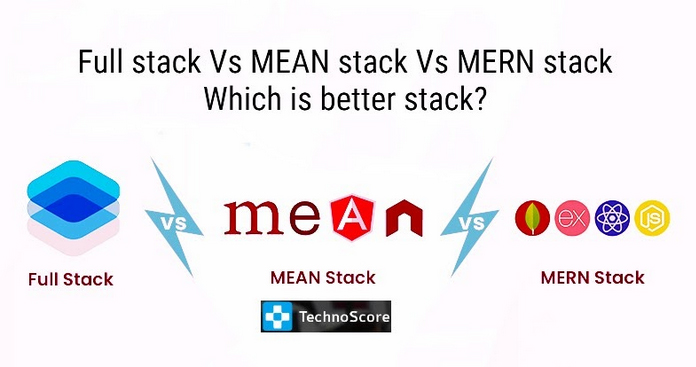 Applications are the most effective way to connect with customers and provide services or products. Developers must employ a diverse set of technologies while creating applications. The need for web and mobile applications is growing every day as the number of Internet users and devices grows. For the building of a custom app, every app maker is seeking the finest stack option.

Nowadays, a variety of technologies are used to create mobile and online applications. A ‘stack’ of multiple technologies, such as FULL Stack, MEAN Stack, and MERN Stack, is used to build the web and apps. But, there is a lot of debate about which is superior to the other. We must comprehend the stack and the benefits it can provide to the development process once it has been deployed to the project. However, in order to make the best option, every developer must have a thorough understanding of the stack’s benefits, features, and cost-effectiveness.

This blog will assist you in selecting one of the three tech stack kinds, as well as understanding their usage scenarios and advantages.

But, before that, let’s talk about,

What is a stack?

As you’re familiar with stack, let’s move forward and discuss,

There are many stacks for app development. But, today we’re going to discuss:

This sort of software developer specializes in an application’s Full Stack, which includes Front End Technology, Back End Development Languages, Databases, Servers, APIs, and Version Controlling Systems. As a result, the term “Full Stack” Developer was coined. Full-stack web developers design the components linked to each component of the app using the necessary technologies and frameworks. Front-end and back-end processes are related to various languages and frameworks. They must also concentrate on constructing the correct database for the project and testing it to ensure a bug-free solution, in addition to working on the front-end and back-end processes.

Moving on, below are some of the disadvantages of full-stack development:

Also Read: How A Full-Stack Development Company Can Help Startups

This is a set of JavaScript technologies that can aid in the development of sophisticated websites and online apps. The full-stack JavaScript framework is useful for application and web development, and it also makes work easier. MongoDB, Express.js, Angular.js, and Node.js are all included. The MEAN stack is being used to build the most complex online and mobile apps. It includes the most often used plugins and cuts down on systems management time. This stack is used by businesses that need to speed up the application development process. Because of its popularity, MEAN is widely used by a variety of sectors and developers. The different interoperability time optimization tools and advantages for various system administrations are the main reasons why developers use this stack. It may also be used to create web pages, web apps, and APIs. It’s a framework that includes the most popular plugins while also reducing device management time. If you want to speed up the creation of online and mobile apps, this is a viable option. They are simply deployable and can tackle any difficult development challenges as they arise. Hire MEAN stack developers from India as they are mostly in high demand since they work with a technology that allows them to produce high-performance technological services that are quick to build and execute. This means that because MEAN stack engineers only have to deal with one core programming language, it’s easier to construct the solution without having to experiment with other technologies.

The benefits of choosing Mean Stack Development are:

Moving forward, here are some, Disadvantages of MEAN Stack:

MERN is a JavaScript stack that aims to make programming easier. It consists of four open-source components: mongo dB, express.js, react.js, and node.js. These modules provide a detailed system for developers to work with. It is a set of technologies used to create high-end web apps. Frameworks, databases, libraries, and other technologies are all used to create these. This stack’s applications will include libraries, numerous frameworks, databases, and other components. It is built with open-source components such as Express JS, MongoDB, Node JS, React, and others. All of these elements will assist developers in learning how to support frameworks. MERN stack is gaining popularity as a result of its well-known and powerful technology. Hire MERN stack developers from India, as they use only one programming language, JavaScript. As a result, transitioning between various technologies or languages is not possible.

Well, the benefits of MERN stack development are:

As of now, we have covered a lot of information about all three stacks. Now, it’s time to check,

Well, in order to state the best stack, below, we’ve compared each stack on the basis of some attributes. So, take a look!

A MERN Stack developer is well-versed in cutting-edge technology. This information is then applied to the development of high-end web apps. Frameworks, databases, libraries, and other tools are used to build applications in MERN Stack.

MEAN stack aids in the development of progressive and adaptable websites and mobile applications, both basic and complex. Overall, it streamlines the development process and improves the overall quality. Whereas, Full-Stack developers are adept at both front-end and backend development. Furthermore, they are capable of completing a project from start to finish. Companies used to have to hire experts in every function, but full-stack developers have made this process much easier.

In order to have a clear understanding, below, we’ve mentioned a table comparing stacks on various attributes. So, take a look!

So, we hope you got the insights of each stack. Full-stack development is one of the best to choose! But,

What factors would you consider when deciding between the MEAN and MERN stacks?

How would you pick between the MEAN and MERN stacks now that you’ve seen the differences? What factors do you use to make decisions?

Let’s have a look at some of the key factors:

To begin, it is beneficial to become fully acquainted with requirements and to have a clear picture of your project’s end aim. Secondly, think about the project’s potential stumbling blocks. Following that, consider requirements as well as the relevance of agility and delivery. Ultimately, while you choose the finest software for you, keep in mind your budget, total development costs, and additional costs. Distinct technology implies different executions and functionality. As a result, in order to select the best stack, you must first determine your needs and comprehend what is required to complete the project. It will be easy to select a tech stack based on the requirements.